How Football Data is Used in the Media

How Football Data is Used in the Media

The media thrives on celebrity, and big-name experts still dominate football analysis. The insights of former players such as Gary Neville or Alex Scott, based on years of experience working in the game, attract a lot of attention. But such knowledge is now being supplemented by data.

Unlike a pundit’s opinion, the data is objective. For an increasing number of fans, this objectivity helps them to better understand what’s happening on the pitch. They can look at the facts and make up their own mind.

Who provides football data to the media?

Opta’s first client was Sky Sports, who started using data in their Premier League broadcasts in the 1996-97 season. It wasn’t all an immediate success. Although a deal with The Observer soon followed, other newspapers were sceptical at first that football fans would be interested in data.

“We changed the tact a little bit,” Opta’s Rob Bateman told NBC Sports. “We condensed [the data] into what we now call Opta facts, which sum things up for normal football fans.” This helped make the data more immediately understandable for fans who were new to it. They could grasp a key idea about how well a team or player was performing and share it with others.

Finding ways to make data accessible for fans has helped Opta grow. They have gone on to provide football data to many other broadcasters and media organisations, including BBC Sport and BT Sport.

At first, these stats were relatively simple, such as how much possession of the ball each team had. The information was collected on Monday mornings, after the weekend’s games had been played. It took analysts six hours per game to record all the statistics.

The amount of data collected has significantly increased over time and become more sophisticated.

Because the data is captured in real-time, by a combination of analysts, computer vision and AI, Opta are able to provide the data to live broadcasters and online live feeds. This means that data has become part of the live match experience for many fans.

The accumulated historical data which Opta has collected over the seasons is useful for pundits and journalists who can look at the long-term form of teams and players. They can use the statistics to explain what has changed when a team starts to dip in form or why a striker is likely to be a good signing for their new club.

When did the media start using advanced football data?

It was a significant moment when advanced metrics started being used in the mainstream media.

In August 2017 the Expected Goals (xG) stat made its debut on Match of the Day. Expected Goals differed in an important way from other common stats that had previously been used on the show, such as shots on target. Instead of focusing on quantity, by counting the number of times something happens, xG calculates the quality of chances that a team creates.

A complex metric, developed by experts at Opta, was now part of mainstream football coverage.

“We’ve worked very closely with Opta over the past few seasons to integrate a lot more data into the show, and this seemed like a natural progression,” explained Richard Hughes, editor of Match of the Day. “We have had more and more data on screen – not necessarily things that have been spoken about by the pundits, but rather support the visuals that have backed up the points they are making.”

As well as featuring on Match of the Day, the BBC also began using xG as part of their BBC Sport coverage online. For example, John Stanton used the stat to analyse which goalkeepers were performing well during the 2017-18 season. He identified Nick Pope as the best-performing keeper, describing the Burnley player as an “unlikely contender for an England World Cup place.” The stats didn’t lie. Pope has gone on to regularly feature in the England squad.

How football data became a regular feature in the media

Since its pioneering use by Sky Sports and Match of the Day, football data has become more and more a regular feature of football coverage across the media.

Punditry on shows showing highlights of the day’s games used to be dominated by former players. The rise of data is creating more opportunities for journalists who are good at analysis 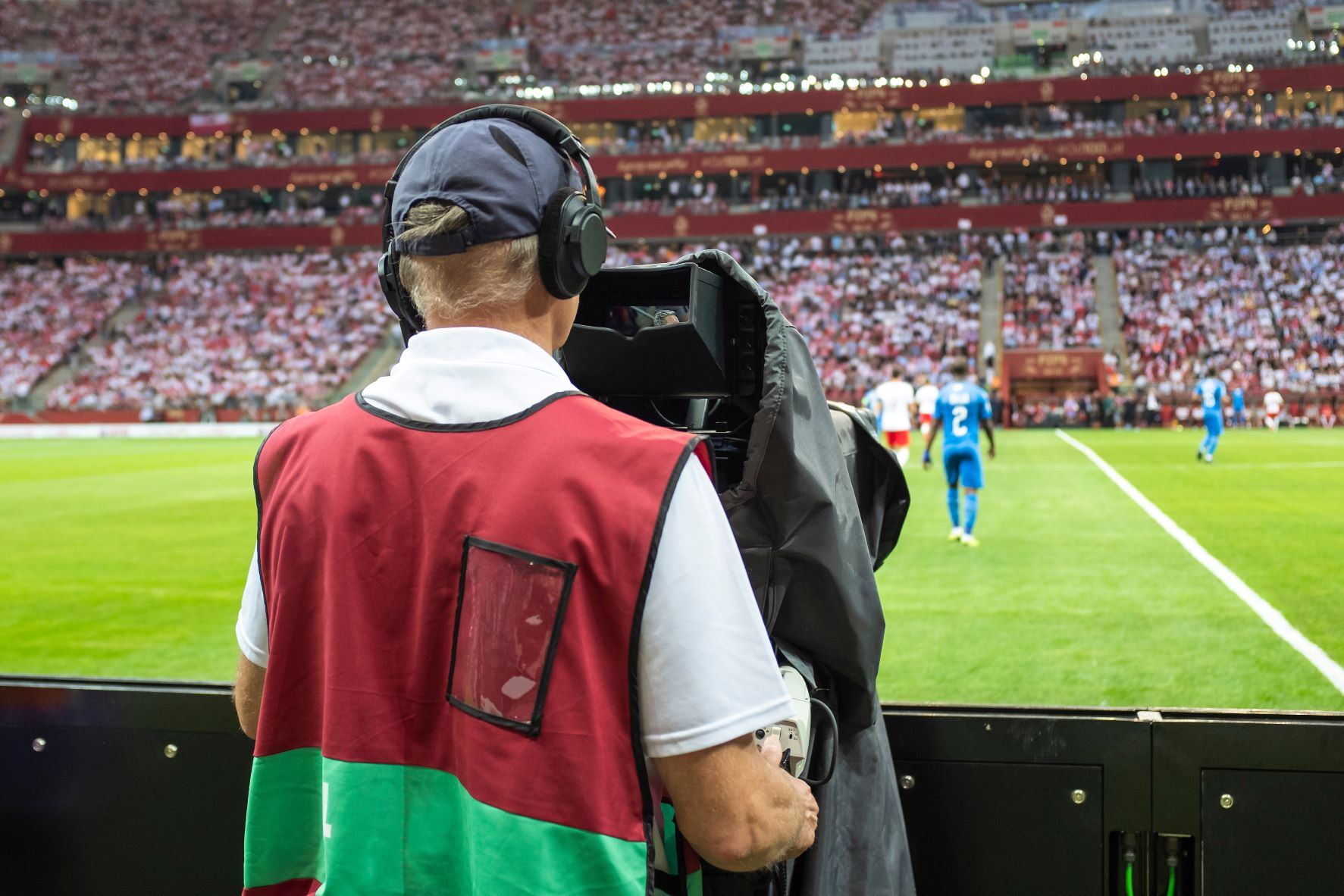 to sit alongside ex-players. Ali Maxwell is one, who regularly featured on EFL on Quest, providing expert analysis about the lower leagues.

The Monday Night Club is a long-running discussion show which covers a broad range of football topics each week. It’s presented by Mark Chapman and features guests such as Micah Richards, Chris Sutton and the journalist Rory Smith  When debating how well different teams are doing, it’s common for guests to bring up stats as evidence that a team is actually performing better or worse than their results suggest.

This level of analysis is crucial for keeping up with the modern football fan. ‘We live in a world where all football fans are ‘knowledge rich’. That’s why it’s so special when you find a show that you genuinely learn something from,” said Dan Walker, explaining the appeal of the show.

Although data is becoming a normal part of football coverage, match reports in newspapers still tend to only include basic statistics, such as possession and shots on target. Instead of looking in-depth at the data, the reports follow the decades-old approach of using words to paint a picture of what happened, recreating the atmosphere of the match and describing the main events.

Such an approach doesn’t reflect how the majority of football fans now follow the sport.

“The modern fan already knows what happened in a game, whether it be from Twitter or Instagram or Facebook,” explained Adam Hansmann, co-founder of The Athletic. “They’ve seen the highlights a million times on the internet.”

Instead of describing what happened, those at the cutting-edge of modern sports journalism are focusing on analysis. They want to explain to fans why something happened.

The Athletic started in the U.S.A, back in 2016, providing in-depth analysis and long-form journalism on American sport. Using a subscription model, rather than relying on advertising, it has aimed from the start to attract discerning sports fans who are willing to pay for high-quality journalism.

In the summer of 2019, The Athletic launched in the UK with a focus on football, especially the Premier League. It quickly made waves in the world of UK journalism by signing top journalists from other newspapers, building an impressive roster of talent that had previously written for publications like The Independent, The Times, and The Guardian.

By focusing on long-form pieces, The Athletic can provide detailed analysis, using data to help reveal exactly why a team or a player is performing a certain way. A recent piece by John Muller used data to identify 18 player roles that reflect the role that a player performs in the modern game more accurately than traditional positions. The piece caused a lot of debate on Twitter, and while many people disagreed with it, it was an interesting example of a journalist using data to get people thinking in new ways about the game.

What’s the future of football data in the media?

The future, of course, is hard to predict. There’s still plenty of space in the media for former pros and experts to share their insights, but data is making big strides forward.

More data is becoming available for the media to use. This summer, FIFA have been testing new match-analysis tools developed by their Football Performance Analysis and Insights team. These tools will help to provide new data about line breaks and the pressure being applied on the player in possession.

The team have also been working on how to use these tools during live matches, allowing them to provide up-to-the-minute data. “The complete process – from the pitch through our external providers, to the screens – takes less than 30 seconds for event-based metrics,” explained data engineer Sirus Saberi. “This enables us to show relevant insights at the right time, and thereby create a new, enhanced experience for football fans and other stakeholders.”

This new technology will be in place for the Qatar 2022 World Cup. You may see the stats on your TV this December.

Once, match statistics in the media were just a few numbers that appeared alongside a match report in the next day’s newspaper or on screen at the end of a game. It was a bit of extra information. Now, data is much more central to media coverage. It’s even part of the live broadcasting experience, enhancing viewers’ understanding of what they’re watching as the game unfolds.